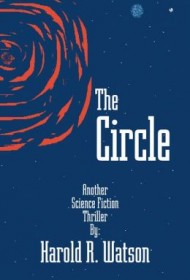 The Circle is a first-person account by the novel’s character Damon Neville, “to tell of the exploits of the Neville family and fellow survivors of Armageddon after the holocaust occurs on Earth beginning in the year 2029.”

In the story, 160,000 Terrans are taken by sympathetic aliens on a 20-year tour of eight planets and prepared for their return to repopulate a post-apocalyptic Earth where they must fight for survival against a second alien empire that has its own designs on the planet.

First-person narrative and post-apocalyptic fiction can be exciting and engaging when characters and worlds are fully realized and three-dimensional. But the author misses opportunity after opportunity to involve his readers and immerse them in the tale by flatly stating the action, as in: “The Atlanteans had only a small force of four hundred or so aboard the mother ship and I wondered how they had been able to take control with such a small force.” Or this: “The raw materials they mine are only available on the floor of the ocean. They have mining subs that go out day and night to gather the precious resources that are later carried to the surfaces and loaded on barges and taken to the mainland to be added to other ingredients gathered through out the planet needed to create the crystals.”

The book is also hampered by the author’s creation of aliens that seem exactly like humans, their home worlds too much like earth: “My wife’s parents were at the motel to meet us when we arrived. They had moved to Aquarius two years after we left Starsis.” Poor grammar, spelling, missing quotation marks and apostrophes add to the difficulty of the reading experience.

In sum, without great questions raised, dazzling new worlds, or intriguing characters, the novel makes for an unsatisfying read.