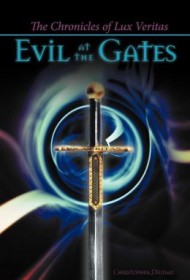 Fantasy, mythology and philosophy unite in this juvenile fiction novel about three teenagers who journey to the brink of heaven and hell.

Fifteen-year-old orphan Solas Gambit unwittingly embarks on his harrowing adventure after discovering a magic sword inscribed “Lux Veritas” (“truth is my light”). Solas desperately follows his grandmother into a demonic vortex, which also takes the sword and his two friends, Dorian and Amy.

The teens awake in the land of Purgator – naked and aged by 10 years. They meet otherworldly beings, including trolls, fairies, nymphs and hellhounds, most of which want to kill the three friends and steal the sword. To rescue Grandma Gambit and escape this land, the trio must defeat Chaos, the Lord of Darkness, and his army of Daemonia.

With substantial echoes of The Lord of the Rings (epic journey, magical items), Star Wars (hidden family relations, small good team versus large evil army) and, most notably, Harry Potter (Solas, Dorian and Amy are nearly interchangeable with Harry, Ron and Hermione), much of the story feels derivative. Even so, the familiar elements mix well with new characters and plot twists. Often-used themes, such as “emotions are your enemy,” remain relevant nonetheless.

Throughout the journey, Solas often refers to classic rock music, which briefly distracts the teens from their dire circumstances. Feisty Dorian deals with stress by dropping F-bombs and other obscenities, which might draw disapproval from parents and librarians but should not disturb most readers in the older range of the targeted audience. Young adult readers should enjoy the light humor, gory violence and coming-of-age issues, such as identity and sexuality, as well as the strange creatures inhabiting this highly literate story.