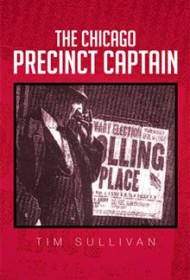 This early 1960’s era novel is set during election season in Chicago when votes are still cast by paper ballot and party leaders have no qualms about corrupt practices to get what they need.

The story is told by Jimmy Barry, a young auto factory worker who finds himself appointed as one of 10 precinct workers for the Democratic elections. He is assigned by Judge John F. O’Toole to work in a district headed up by John “Bananas” Frinko, who also runs the Club Destiny Tavern and Lounge. From his office in the back, he reigns over an area called “the village” by locals and inhabited largely by Ukrainian Russians.

Fairly green about the ways of politics, Jimmy soon gets an education in ticket fixing, rigged ballots, and bribery. He even finds himself helping complete a $1 million transaction reportedly engineered by Joseph Kennedy. When he’s not helping with the cause, he’s partying with friends and courting various women who seem generally to have their own agendas.

In terms of the era, Sullivan nails the details, working in colorful characters, local slang and the period culture. But that also means using language that, while common in the day, might seem racially offensive to present-day readers. There are minor copyediting flaws throughout, such as missing commas or periods and repeated information, for example, the definition of the “three s’es (shit-shave shower).” Additionally, Jimmy’s relationships with women seem to follow a set pattern, with the women often cold and aloof and Jimmy trying to tease them out of it. But there is also some very nice writing, such as, “she danced so close, you couldn’t have put a whisper between us.”

All in all, The Chicago Precinct Captain is an enjoyable look at the era — a time when corruption might have been the norm, but the working man still believed in the possibility of a bright future.