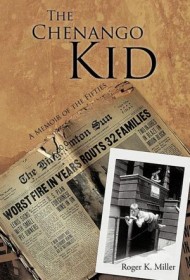 Born in 1941, Roger K. Miller grew up in Binghamton, New York. Long after he departed, he became a newspaper reporter and editor. Used to putting words on paper, Miller has now written a memoir looking at how he became the man he became by exploring his life through high school graduation. Perhaps to give the coming-of-age story broader appeal, he also reflects on the decade of the 1950s, as well as his place within that decade.

Miller suggests that in many ways his childhood and adolescence added up to something wholly ordinary for a U.S. Caucasian at the time. Well, maybe. But if you combine all the elements, Miller’s childhood seems rather out of the ordinary. Miller’s mother, separated from her husband, held a full-time factory job and in her non-work hours tended to carouse; Miller suggests she was a woman of “easy virtue,” yet she never abandoned Miller and her children fathered by men other than Miller’s father. As for Miller’s father, he was often unemployed and idiosyncratic by any measure; he, too, however, clearly loved his son and never abandoned him.

Miller’s older half-sister Louise–something of a wild child for her time and his protector and tormentor–was used to speaking out and living on the edge, yet compassionate, as well. She is a compelling character here.

As for Miller’s reflections about the literature, music and politics of the 1950s, he delivers understanding beyond the superficial, especially the notion that television offered a shared cultural experience that crossed geography, social class, gender, age and ethnicity. Miller’s analyses even extend to TV sitcoms such as The Many Loves of Dobie Gillis. Who knew those seemingly dopey story lines actually served a subversive role by questioning the American Dream?

While some of the detail about Miller’s childhood never rises above the mundane, all literate women and men who remember that decade will find plenty to roll over in their minds in this wide-ranging and thoughtful memoir.