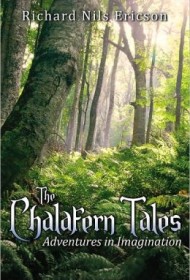 The eight stories in this collection of magical or unusual adventures undertaken by “ordinary” children feature time-travelers, fairies, leprechauns, winged horses, Native American spirits and other intriguing characters. They are aimed at readers 10 and up.

On the plus side, the stories in The Chalafern Tales are imaginative and richly detailed, and the author establishes place and situation quickly and effectively. In addition, the writing is often clever and always evocative.

Unfortunately, though, the complexity of language is sometimes at odds with the story, making it difficult to discern the intended audience. “Sparlina,” the story of a fairy trying to save the life of a human girl, for example, would most likely appeal to a child reading at a younger vocabulary level than is presented. Yet, some of the narrative seems adult oriented (“Her mittens were very warm but, lacking the dexterity of fingered gloves, also cumbersome”), as does the inclusion of adults in primary roles.

There are also issues of logic: In “The Bell Tower,” for instance, a young boy jumps around in time. His disorientation and discoveries are handled well, but sometimes his life has moved on as if he’d never left the time period – and sometimes it’s as if he disappeared entirely for those years. Additionally, the “moral” seems to be that the boy is running into difficulties because he has made “poor choices,” but it’s never clear what bad choices those are; to readers, it seems as if he’s simply extricating himself from challenging situations.

More problematic, however, is that the author can be heavy-handed with these life lessons, as he is in “Rainbow Riders”: “The events that happened to them along the way forever changed all of that. They each learned a lesson.”

That said, parents may appreciate Richard Nils Ericson’s collection precisely because it isn’t “edgy,” avoids violence and is intended for strong readers. For those reasons, the book is worth consideration.