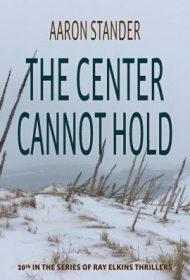 The Center Cannot Hold is the 10th book in Aaron Stander’s Ray Elkins canon. This time, the intriguing mystery appears during the dead of winter in a Michigan resort community. Sheriff Ray Elkins and deputy Sue Lawrence’s routine police work becomes anything but routine as a series of unrelated events impact the community.

As the story gets underway, the cabin of Elkins’ predecessor Orville Hentzler is intentionally torched and his grave vandalized. Next, a couple of local hunters report that someone with an automatic weapon has used their duck decoys for target practice. Then, former fashion-model-turned-businesswoman Becca Sterling is murdered in her home. Other random incidents of vandalism and arson also terrorize the small community.

Elkins and Lawrence meticulously tie the events together but find themselves facing another puzzle: The suspect is targeting unoccupied, dilapidated places, and people who have been dead and forgotten for decades – with the exception of Becca Sterling.

Stander’s generally fast-paced, engaging writing slows in some passages as Elkins and Lawrence carefully—and repetitively— investigate and question suspects. That said, the couple’s re-examining of clues, typical of actual police work, gives the story the ring of authenticity.

Elkins and Lawrence are complex characters worth rooting for. Elkins, for example, can be empathetic to a fault. He’s uncomfortable examining dead bodies and giving a naloxone injection to a teen who has overdosed, not to mention expressing himself to his girlfriend. On the other hand, he’ll not hesitate to run into gunfire to save lives.

Be it villains or heroines, Stander writes strong female characters who don’t acquiesce. Lawrence does a lot of heavy lifting for Elkins and comes to work with bruises after a suspect throws a snowmobile at her. In the end, she saves the day and is probably deserving of her own series books.

Such strengths make The Center Cannot Hold an engaging read that should satisfy any mystery fan.