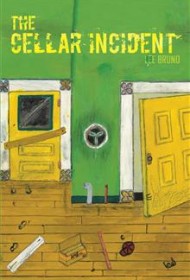 In The Cellar Incident, Lee Bruno presents an unusual blend of horror tale and philosophical musings about the nature of evil.

Marge, the narrator, can’t quite put her finger on the attraction that molded her and friends Sherri, Franz, Travis and Brian, into an inseparable group of college students. But she knows that, for her, they will always be connected by what happened in the cellar of an abandoned farmhouse in October of their senior year.

Marge relates the first half of her story as a fairly typical haunted house tale. Her descriptions of the dilapidated house are filled with Gothic references: fetid smells, rambling passageways, unexplained noises, and, of course, a creaking kitchen door leading down some rotting stairs to a dank, moldy basement and another door that is locked and nailed shut. Anyone who has ever seen a horror movie knows that it’s unwise to go to the basement, but, as Marge hides in the kitchen so she can eavesdrop on the couple, Sherri and her younger boyfriend Billy descend into the darkness below. Billy is never seen again. Sherri blithely accepts the situation, and Marge’s life is forever changed.

Although the “incident” is never far from the narrative, most of the last half of the book is more a philosophical discussion of the nature of evil than a horror novel. Marge comes to believe in the existence of pure evil, and in the story’s second half, she offers up quotations from St. Francis of Assisi, Gandhi, Schopenhauer, Tolstoy and a dozen other authors and religious figures as she addresses her changing attitudes on this and other topics. Readers never learn exactly what happened in the farmhouse basement or what is behind the locked door.

Bruno delivers some chilling description. But using a haunted house tale as a vehicle for a philosophical rant just doesn’t work, and without a resolution to the basement episode, The Cellar Incident provides an unsatisfying read overall.