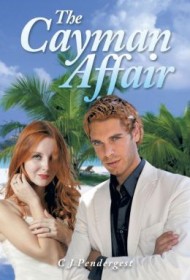 The Cayman Affair is a romantic suspense novel set in modern-day England. It tells the story of a successful banker and the man she meets and loves who suddenly abandons and betrays her. But is he really the con man she thinks he is?

Connie Sextant, a banking computer expert in Manchester, receives a Skype business call from Cayman Islands bank loan officer Mike Appleyard. Instant attraction flares. In just weeks, they meet, fall in love and have one memorable night together. Before Mike leaves, he insists on taking a copy of Connie’s innovative computer program that tracks money laundering. One month later, Mike is reported dead in the Caymans and Connie is pregnant with his child. Evidence points to Mike being an imposter who stole her program.

Sixteen years later, Connie sees Mike at a Spanish resort. Stunned, she reports him to the police, and a trap is set. When Connie triumphantly confronts Mike, she is shocked to learn that he is not who she thought he was.

The Cayman Affair fits nicely into the romantic suspense genre. The opening is intriguing and readers know immediately that there is much more to come. Characters are well defined, likable and believable, and the story delivers appropriate setbacks and well-placed action. The sexual content is limited to two events and is explicit but not overly so.

There are some flaws, however. In several places the narrative drags with extended explanations of banking regulations. A few times, events fall too neatly into place and the narrative borders on trite. This book would also benefit from further copyediting, as there are also occasional misspellings and punctuation errors.

Readers searching for a deep, reflective story will turn away, but romance fans seeking a light, fun, fast read will enjoy this tale.