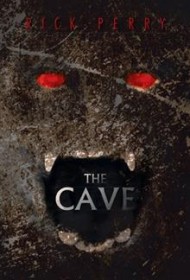 Earth and Mars have had an antagonistic relationship in science fiction ever since H.G. Wells unleashed a Martian invasion on England in The War of the Worlds. Over 100 years later, Rick Perry takes up the thread in this uneven tribute to science fiction action-adventure stories. With The Cave, Perry travels to the future – 2509 – but retains an old-fashioned, pulp-fiction feel, with entertaining although superficial results.

The Cave has an engaging premise: An intrepid group travels to Mars to avenge a deadly Martian attack that took the lives of 21 million Earthlings. They must plant a bomb and then travel underground to their rescue vehicle before detonation. It’s a classic quest with a variety of characters, from the group’s leader, Jarod, for whom this mission is very personal, to the android Lex, for whom the operation appears to be pure scientific inquiry. The group faces a nonstop barrage of Martian creatures lurking in tunnels; tensions run high and our heroes struggle on valiantly.

Soon, though, a reader realizes that the tunnel battles will continue without much variation for most of the novel. The rhythm becomes familiar, and while each scene is suspenseful, the repetition prevents the story from gaining enough momentum to make readers truly wonder what will happen next. Perry’s overly dramatic presentation – his liberal use of exclamation points, for instance – lends a soap-opera quality to the proceedings, often crossing that fine line between camp and out-and-out melodrama.

The Cave is a quick romp through the imagined underbelly of Mars, with all the trimmings of a classic science fiction novel. What’s missing is the deeper contemplation of sociological and psychological issues that makes the best science fiction compelling to a wider audience.