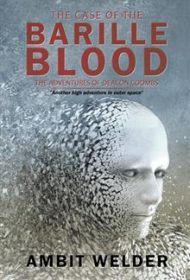 The Earthling detective Deacon Coombs is back with another outer space high adventure mystery to solve.

The year is 3534, and Coombs is thrust into conflict with the Barille, the most powerful, secret policing agency in the universe, a law unto itself that roots out criminals and delivers justice at its own hands. When two seemingly unrelated murders on two different planets are brought to Coombs’ attention, and the Barille itself appears to be implicated in the murders, Coombs decides to risk his own life and piece the mystery together. To “save all life as we know it,” Coombs must uncover the Barille’s four top-secret leaders, collectively known as the Barille Blood, who might be involved in the plot.

The reclusive Coombs and his faithful android companion, Jim, gather a unique group of alien helpers along the way and also confront a cornucopia of dastardly alien and android villains (known as Owlers). There’s plenty of action, dangerous circumstances, spies and assassins everywhere. Readers meet Globianans, Jadu, Zantaurians, Yoobians, Aralians, Xixlers, and finally, the Roothuts, who hold the key to the true solution Coombs seeks.

Ambit Welder fills the book with clever world-building and unique creatures: the Quallan tree, for example, to which Xixlers are bound for existence on a hyper-dry planet that has “three suns that never set.” The tree requires no water, and is the only food source for the Xixlers, while being “poisonous and fatal to all extraterrestrials.”

The highly imaginative tale loses itself in wordiness and melodramatic prose occasionally, particularly in the early third of the novel, and the pace and reader engagement suffer accordingly. But because of the otherwise captivating storyline, these shortcomings may be unnoticed or overlooked by some readers. From the middle of the book on, the tempo picks up and marches steadily along with our intrepid sleuth, his Owler Jim, and companions, powering to a climax where sleuthing, action, and science fiction meld into a satisfying ending.