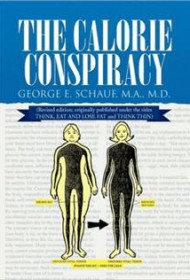 For a small book, there’s a wealth of information packed in here. Author George Schauf has a specific weight loss plan that resembles the Atkins and diabetic Exchange Diets, albeit with some crucial differences (cinnamon rolls for breakfast!), and the plan is laid out in detail here. Schauf’s theory is that many obese people are malnourished, which makes calorie restriction an ineffective path to weight loss. His “QQF” plan emphasizes quality, quantity and frequency of meals as crucial to building lean tissue and starving fat cells (though “quality” becomes relative when the author goes on to recommend pork rinds as a healthy snack).

The Calorie Conspiracy is engagingly written, and Schauf includes information about the psychology of obesity that reflects a sensitive and holistic view of a problem many people mistakenly view as simple. There’s also a wealth of information about nutrient function and the digestive system, included to support his theory. This is a revision of a previous book, so that more evolved stance may be attributable to an overall evolving view of obesity.

Schauf’s eating plan is a bit hard to understand as described and relies on significant amounts of animal protein, leaving vegetarians on their own. The short series of calisthenics detailed here suffer for lack of diagrams or pictures and the descriptions are hard to decipher (is that a jumping jack or a push-up?). Weight loss on this program is estimated at 3 to 8 pounds per month, which adds up (or subtracts, as the case may be) over time.

Despite those flaws, anyone tired of living with excess weight will find powerful food for thought in The Calorie Conspiracy.