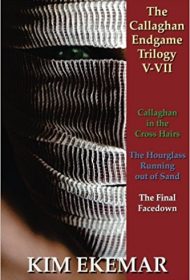 Callaghan in the Cross Hairs, The Hourglass Running out of Sand, and The Final Facedown are the last three books of a “septology” about Matthias Callaghan and his enemies in the Russian Mafia who are determined to kill him. A lot happens in these three stories, which don’t seem to stand alone.

When Callaghan first appears 36 pages into the story, his name doesn’t come up – his scenes are in first person – so initially it’s up to readers to guess who and where (Australia) he is. He has left a murder scene in Arizona, gotten married in Australia, been arrested in Italy on bogus British murder charges, and extradited to the UK, where he is released on bail and promptly kidnapped, stripped of most valuables, and left for dead in the Sahara Desert. He resourcefully trades two cufflinks conveniently not stolen from him: one for passage to Tripoli and another for passage to Italy. While on the lam from the authorities, Callaghan must also defend himself and his family from two-faced Russian mafiosi.

It’s an interesting storyline that carries through to the end. However, the narrative suffers from several flaws that impact its effectiveness: The scenes are somehow simultaneously short and verbose: “This is where we’ll convert our profits from the drug transactions to a taxed and impeccably respectable capital,” a compatriot explains to Russian Mafia chief Vasily Ivanovich. This wordiness becomes wearying and slows the story’s pace. While most characters are well drawn, readers will tire of Vasily giggling throughout the trilogy. Readers will also find it frustrating that they are given the dates of various scenes but not the locations.

Overall, the story offers a sympathetic hero and some rewards, but many passages are puzzling and readers coming fresh to this series will be at a great disadvantage. Those who start at the beginning may find the events far less confusing than those, such as this reviewer, who started with Volume V-VII.