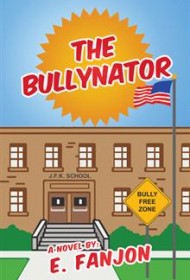 In E. Fanjon’s debut book for adolescents, The Bullynator, a headmaster must prove his ability to run a peaceful, friendly school in order to earn a promotion, and a student helps him by battling a group of nasty, antagonizing students.

JFK is a popular, prestigious high school, but a small, menacing clique has the other students in its tight-fisted grip. The worst is Jack, whose father is an abusive prison guard. David, the book’s hero, posits that he and his close-knit friends have become targets because Jack and his gang hate seeing others happy.

As the school year continues, David and his group learn to work together, using their wiles, courage and good humor to fight the bullies. Reader will cheer these students as they challenge the bullies with smart repartee and word play. Soon, the group’s kindness and sense of justice grows contagious, and the rest of the school joins their anti-bullying bandwagon.

One oddity in an otherwise solid narrative is the inordinate attention paid to characters’ heights. The differential between David (average height) and Carrie (a staggering 6′ 4 ½”) is frequently referred to, though never explained beyond the fact itself. And their physical relationship seems rather odd: “Carrie walked around the pool, swaying David back and forth in her arms like a baby…”; “…David wished Carrie would wrap him in her soft wool coat, pick him up… warming him like a baby in a blanket.”

What Fanjon does best is capture the myriad personalities in the microcosm of an American high school, as well as seamlessly weave so many threads together. In addition, he does a fine job of handling topics of racial prejudice and class inequality, and the story’s ending is a triumph without being unrealistic or clichéd, making it particularly satisfying.