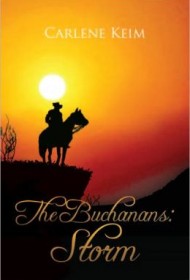 For the first 150 or so pages, The Buchanans: Storm is an old-fashioned, Harlequin-style historical romance. But as the book progresses, it becomes clear that it’s more–and in some cases less–than a formulaic read.

The book takes place in 1880s Texas. Storm Buchanan is a handsome Texas Ranger who, after losing his Ranger father as a boy and watching his mother die broken hearted, vows to never marry. One afternoon, Storm literally runs into Boston Brahmin schoolgirl Amanda Brennan as she alights from a stagecoach in a small Texas town. Beautiful, feisty Amanda made the journey to find her brother Jack, who was last seen in the area. Meanwhile, Storm is hunting a bank robber gang that may be involved in Jack’s disappearance.

Storm sees Amanda as a helpless, albeit beguiling, female whose attempts to find her brother make his job harder. Amanda resents Storm’s heavy-handed treatment while secretly admiring his muscular body. This push-pull plotting gets tedious–the middle 70-80 pages could easily be deleted–and sometimes veers toward sexism. Many romance readers will put up with quite a bit of pre-feminism behavior, but a scene in which Storm puts Amanda over his knee and spanks her for misbehaving is too much.

Fortunately, the book gets back on track in the last 100 pages, evolving into a well-crafted romantic thriller with exciting action scenes, steamy but tasteful sex scenes and a denouement that is surprising and satisfying.

Keim has a good command of dialogue, and her writing style is clean and reasonably polished. But her use of spell check creates some sentences that are not only distracting, but laughable. (The book’s first line refers to a “toe-headed” boy; at one point, she writes, “His face hadn’t given up the hostel look” and so on.) That, coupled with random italicizations, gives the book an unprofessional tone that detracts from an otherwise entertaining read.