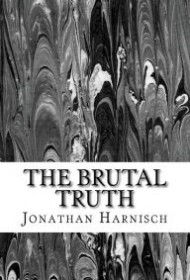 In this slim volume of personal essays, the prolific New Mexico novelist, filmmaker and mental health advocate Jonathan Harnisch provides heart-wrenching insights into his long battle with schizophrenia. A gifted writer who has weathered seven suicide attempts and more than 30 hospitalizations, Harnisch speaks with chilling authority about “the shattered stained glass” of a disease whose terrifying hallucinations keep him from distinguishing between “what is real and what is not.”

As in Harnisch’s earlier books—notably, his 803-page semi-autobiographical novel, Jonathan Harnisch: An Alibiography—the 40-year-old author’s moods alternate between optimism (“I always do my best to keep things positive”) and bleak despair (“The old me disappears as I fall deeper and deeper into oblivion”), but his goals always remain clear: to burn off “the fog of schizophrenia” and put an end to the stigma associated with mental illness, and the maltreatment of its victims.

Harnisch’s bio, as he relates it here, is fascinating. A privileged graduate of Choate and New York University’s film school, he calls himself “an unemployed artist with a botched trust fund and a life that, in terms of conventional reality, doesn’t actually exist.” Also diagnosed with an array of other “comorbidities” (PTSD, Tourette’s Syndrome, autism, etc.), he writes, for self-therapy, only when sleepless and symptomatic, producing the raw, anguished, truth of a survivor. In his dark mood, he tells us he is friendless and cut off from family, reduced to having philosophical conversations “with the store clerks at the Quick Fix on Maple Street”; but later, he praises his loving wife and the company of their three dogs and seven cats.

What’s “real?” What’s imagined? In a life so troubled, we are left with few answers. But Harnisch’s harrowing quest for clarity is undeniably real. Mid-book, he seems to address the demon of schizophrenia itself, with moving eloquence: “Love me, hate me, hurt me or kill me. I keep fighting.”