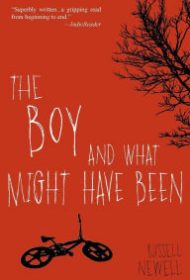 Author Russell Newell offers a compelling drama in his novel The Boy and What Might Have Been.

Gus Delaney is on top of the world. It’s 1976, and he’s managed to get an 84% return on a financial fund in a poor market. He can’t wait to see his two beautiful children, Jack and Lilly, for Christmas. The only thorn in his side is Victoria, his ex-wife.

After dropping the kids off with Gus late, Victoria calls the next morning while the kids are outside enjoying their new bikes. Gus runs in to take the call and shouts for seven-year-old Jack to come to the phone. But… Jack is gone. Dead? Kidnapped? The police mount a search but come up with few leads.

Victoria uses the incident as leverage to gain full custody of Lilly. Now having lost both kids, Gus’s life spirals downward until his behavior lands him in jail. In a lateral timeline, readers learn that Jack, in reality, has been kidnapped by a religious cult and is slowly being brainwashed.

Some may be put off by the religious passages, which can become wearying. And although Gus is described by a work subordinate early in the story as composed (“I’ve never seen the guy get rattled. No matter what happens, he’s always cool.”), this seems inconsistent with his portrayal, as he is filled with rage even prior to the kidnapping, pounding on tables and punching walls. Still, the author skillfully illustrates the changes that occur in him as time goes by, and readers will feel the painful intensity of his desperate situation.

Ultimately, this is a story of redemption and the true meaning of faith—one that should please a wide audience.