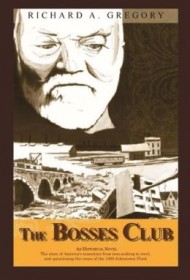 We’re all connected to history, but we’re not all as connected to the evolution of the iron and steel industry — and the most infamous location where that occurred — as is Richard A. Gregory. Descended from ironworkers, Gregory has used his ancestors as the main characters in his book, in order to depict this slice of history.

The Bosses Club tells the story of The Cambria Iron Company, which dominated Johnstown, PA. for 150 years. Gregory’s thesis is that Cambria competitor Andrew Carnegie conspired to weaken an earthen dam above Johnstown to destroy Cambria. This runs counter to the commonly held belief that the destruction caused by the famous 1889 flood was entirely an act of nature.

Gregory uses imaginary dialogue to add life to his historical narrative. At times, the technique adds interest, but at other times, it strains credulity. In one passage, for example, a conversation between ironworking friends includes this: “The leaders in the industry are finding out that steel making is not an art, but a science. It wasn’t until Robert Forester Mushet, a British chemist and metallurgist, discovered he could add carbon back into the molten metal by throwing a shovel full of chemicals he called spiegeleisen, back into the vessel. [sic]”

The section about the Johnstown flood is a dramatic high point. But it’s only a minor part of this story, and the details and even minutiae that characterize the rest of the book are largely absent from this part. Gregory’s assertion about Carnegie, while plausible, isn’t substantiated by the facts that the author provides.

As a recording of this particular Industry’s history, The Bosses Club succeeds. But those interested in a compelling story in addition to a historical record will be left wanting.