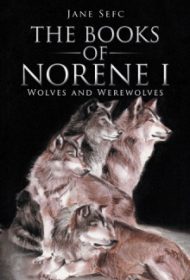 In The Books of Norene I: Wolves and Werewolves, Jane Sefc envisions a fantastical world marked by a long-fought, bitter conflict between two factions.

On one side is a human civilization that bears structural and societal similarities to medieval Europe: As Ethan Philipson assumes the crown of the kingdom of Norene after his father’s death, he is focused squarely on keeping the realm safe from external threats.

The most significant threat turns out to be from the other faction in Sefc’s imagined world: werewolves. These aren’t the monsters portrayed in ‘50s horror flicks, but a breed of vicious, calculating and brutish creatures vying for supremacy in Norene.

The conflict between the humans and werewolves reaches a new height with the recovery and disappearance of an ancient charm that falls into unlikely hands. A mysterious stranger who goes by the name Rex is obsessed with retrieving the magical stone set in a necklace, and he’s willing to play political factions and military forces like chess pieces to get his hands on it. As the story evolves, Rex’s machinations throw the entire balance of power in Norene into chaos.

Sefc strives to create a richly imagined world in the space of less than 200 pages and, in some ways, succeeds. Her fusion of the traditional fantasy elements one would expect from a J.R.R. Tolkien-type adventure with an unorthodox set of characters (i.e. werewolves) offers an innovative take on the genre. (The oft-told story of a deposed ruler striving to protect his realm feels fresh when werewolves are the ones threatening the peace.)

Unfortunately, the book’s slim size hardly gives the author the proper space to fully flesh out her creative vision. Combined with dialogue that rings more modern than medieval, the story isn’t always effective.

Even so, Sefc writes with clarity and concision, and her take on the fantasy narrative offers refreshing moments for longtime fans of the genre.