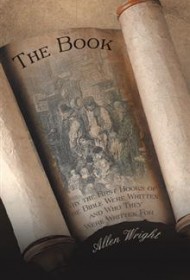 Allen Wright’s The Book: Why The First Books of the Bible Were Written and Who They Were Written For explores the literary and historical events that influenced the first 10 books of Hebrew Scripture.

Looking at how neighboring cultures helped shape the Hebrews’ understanding of God, Wright’s book doesn’t break new ground; Bible scholars and historians have dedicated much time, especially recently, exploring, for example, the similarities between the story of Noah and the great flood depicted in the ancient Sumerian text, Gilgamesh (which may have been written 2,000 years before the Hebrew Scriptures were recorded). Yet, Wright’s sincerity shines through in his easy-to-read summaries.

Some constructive criticism: One, the book is not footnoted so it’s tough to discern what’s fact and what’s speculation. Two, Chapter 18, a personal story about an early encounter with a young Jewish woman, would work better as a preface rather than as an ending, in part because it sets up the author’s intention for his work: to increase awareness and strip down barriers. Three, the book should be divided into parts to help readers navigate the big ideas (the first part being his introductory material, the second, his examination of the selected books of the Bible, and third, his wrap-up and conclusions of his intellectual journey). Four, a good copyeditor is needed to tighten the text and to catch the numerous grammatical and spelling mistakes throughout the book (there are two mistakes on the jacket alone: the subtitle should use “whom” not “who,” and “interpretation” is misspelled on back cover).

While many people interested in biblical history will know that the Old Testament wasn’t written in a vacuum, with more polish Wright’s book could serve as a nice introduction to the historical background behind the Greatest Story Ever Told.