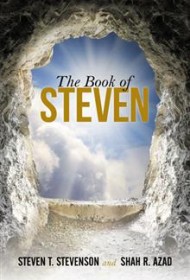 Steven T. Stevenson and Shah R. Azad have co-authored a novel exploring the purpose of life and the experience of life after death, especially for those who commit suicide.

While the novel proclaims that there is truth in all religions, life after death is explored with a Christian slant through biblical references and characters called God and Jesus. However, God is not the expected voice of judgment but is, instead, very understanding of human transgressions. Jesus, frequently called Junior, is more casual and comical than traditionally depicted, often wearing soccer jerseys and Mardi Gras beads. Here, heaven is only a temporary resting place until souls are ready to be reincarnated.

The plot revolves around 34-year old Steven. Having committed the greatest sin of suicide, immature Steven finds himself in heaven blind, immobile, and told by a reassuring Jesus to relax and find inner peace until his sight and mobility are restored. Steven soon also learns that sinners are never punished here, but brought before God to talk about the reasons behind their actions so they can start new lives devoid of their sins.

In his many conversations with God, Steven sounds like a rebellious teenage son: He lies, fakes apologies, and even blames his suicide on God for having created such a horrible world. As conversations continue, Steven comes to understand the connection between his choice and his fear of fulfilling his potential.

Despite references to the Trinity and Christian symbols, Christian fundamentalists are not likely to agree with the authors’ theological interpretations nor with the conclusion of living life to fulfill one’s self rather than living by God’s commandments. Steven’s frequent cursing may also be distasteful to some, though it fits his characterization.

Those who enjoy exploring theological ideas or want an optimistic worldview, however, will find the book intriguing. Steven’s conversations with God are insightful attempts to explain many of the world’s troubles and his self-revelations make for a valuable read.