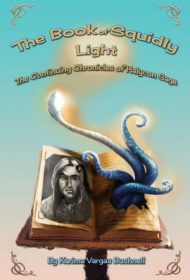 The first book, The Life and Times of Halycon Sage, introduced the eponymous Sage, an amnesiac and celebrated author. Here, we find him just where he left off: dwelling in a world recently purged of modern technology and escaping into his writing, unaware of how his words impact a fluctuating multiverse. In a metafictional conceit worthy of a Charlie Kaufman film, it turns out that while Bushnell is the creator of Sage, Sage is the author of Bushnell and the reality—our reality—where she exists.

In Sage’s world, he’s joined by a multicultural cast as they navigate the sudden discovery of a squid-like race of intelligent extraterrestrials. Meanwhile, in his fictional creation (our world), a mad dictator has come into power, threatening everything that really matters. Setting things right will bring both worlds together in a collision that extends consciousness to inanimate machines, exposes politically motivated time-travel conspiracies, and harnesses the spiritual power of the written word.

The Book of Squidly Light is ambitious but never too serious. Bushnell namechecks authors like Vonnegut and Heinlen—clues to the project she has in mind: a social novel drawing from sci-fi tropes to offer wry introspection about current affairs. Frequently funny in the vein of Terry Pratchett or Douglas Adams (although not every joke lands), the novel eschews the darkness of dystopia and finds hope in the shadows of apocalypse.

It may well try to include too much (romance, literary criticism, spirituality, and political discourse—not to mention aliens, nanobots, and time travel), and often the details can be sketchy or plot points can appear almost deus ex machina when needed. But readers shouldn’t sweat the details—the author certainly doesn’t. Instead, she’s having too much fun and betting that those seeking escape, however seemingly absurd, from the oppression of the current world, might just have fun, too.