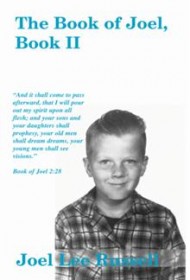 Joel Lee Russell’s life story could be the tale of many American men born in the 1940s. Like that of most Vietnam vets, Russell’s ordinary life turned extraordinary when he joined the armed forces during the 1960s. In The Book of Joel, Book II, we get intimate with this rambunctious Catholic boy from northern Ohio whose life often took him down dark, violent, lustful roads, but who ultimately rises from his failures and insecurities through a deep faith in Jesus Christ.

Personal memoirs of unknown people can be hit or miss, but Russell’s vivid details, transparent honesty and colorful stories hit the bull’s eye. Readers will be hooked as he tricks his sleepy little brother into opening the car door while they’re speeding down the highway and resolves in the suffocating heat of Vietnam to sacrifice his life as a U.S. Marine.

While this book is technically imperfect and desperately needs an editor, many readers will forgive the mistakes as Russell works suspense into nearly every chapter. He writes with the flavor of the eras he’s remembering. His use of profanity and sexual subject matter may make Christians squeamish, but this sort of sin is what makes his salvation so inspiring. When Russell finally finds Jesus, it feels like a dazzling white light has entered his life.

Toward the end of the journey, Russell’s battle with bipolar disorder weaves a thread of doubt into the tale, forcing us to choose whether to trust what he’s written. But even if his stories occasionally embroider the truth, this book will touch the heart of war veterans as a testimony of hope, healing and victory over emotional wounds. It also will enable younger generations to understand the past behind this brand of American hero – the Vietnam vet – who has too often been forgotten.