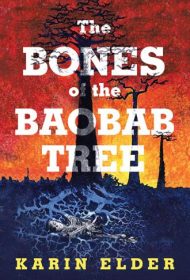 The Bones of the Baobab Tree, set in South Carolina in the early 1800s, is the story of the journeys of two slaves, culminating in events when they eventually meet.

Nicholas is kidnapped from a plantation as a child and begins a terrifying, brutal odyssey. At the hands of a sadist, for years he’s repeatedly tortured and forced to commit gruesome acts, such as being an accomplice to rape. Falling asleep one night under a Baobab tree, he drops into a trance and encounters 12 spirits who prophesize a triumphant destiny, yet his horrors continue.

Meanwhile, Khat, born in tribal Africa, is mentored by her grandmother, who, having dreamt that Khat will travel across the waters, prepares Khat for that destiny. That fate commences with Khat’s kidnapping and arduous ocean crossing in a slave ship. Her cooking abilities allow her to become a plantation cook, avoiding harsh outdoor duties. While life is not easy under the watch of a shrill mistress and even more shrill overseer, Khat helps hearten her fellow slaves and the plantation owner’s mistreated young daughter.

The story’s premise is sound, but the execution falters. What could be a powerful witness to the real struggle of slavery, instead presents as a narrative filled with gratuitous violence and improbabilities. For example, Nicholas is brutalized for years, yet appears at Khat’s plantation as a robust, handsome young man. In addition, the key resolution hinges on a character only introduced in the final 50 pages, at which point Nicholas and Khat are relegated to secondary characters.

Filled with sentence fragments, the writing style is choppy and halting, creating a challenging read.

While an ambitious undertaking, this book misses the mark of more impactful treatments of the subject.

Also available as hardback and ebook.