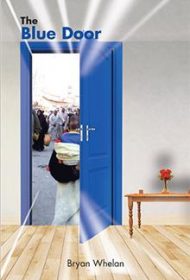 Bryan Whelan’s The Blue Door explores what happens when the story’s main character discovers the titular portal to other dimensions.

Whelan offers just a few pages of background regarding the novel’s protagonist, Robin Jackson, before the action begins in earnest. Jackson is a hard-luck case from a hardscrabble neighborhood in Melbourne, Australia. At the novel’s outset, she’s cornered in her own apartment after fleeing police for the possession of drugs belonging to her no-good boyfriend.

Jackson finds an unlikely escape route: a blue door she’s never noticed before. It becomes the engine for the novel’s action: Stepping through the door transports Jackson to faraway times, places and identities. After crossing the boundary, she finds herself in a police uniform, investigating a dead body. Another trip takes her to an isolated village in rural China. Yet another brings her to the bridge of an Australian warship.

The novel’s first chapters follow this basic narrative pattern, tracking Jackson as she repeatedly goes through the mysterious door, finding herself in different situations and facing unique crises. Eventually, the author offers explanations about the portal and its powers, and his protagonist finds allies and answers through her many journeys.

The book’s conceit is simple enough, and at less than 200 pages, the narrative never lingers long on a single setting or conflict. Writing in a first-person perspective as Jackson, Whelan keeps the tone conversational and casual. Using the bawdy, expressive parlance of Melbourne, the author sketches out a straightforward adventure.

With those limits of space and vocabulary, it’s not surprising that the author never mines any deep themes. The book’s small size and scope preclude great narrative feats, and it feels more like a charming narrative experiment than a serious literary effort. That said, Whelan keeps the action lively and satisfactorily explores an interesting idea. In a book that can easily be managed in one or two sittings, Whelan offers intriguing adventure, and readers will enjoy the varied settings.