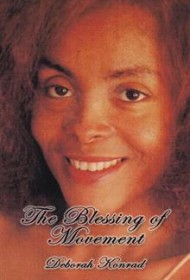 A biography of a family member must be unflinching to be taken seriously, sharing the good and bad in equal measure. The Blessing of Movement delivers. It’s a wild ride—a story of loss and redemption and the chronicle of a sister’s love.

Author Deborah Konrad describes growing up in and around Houston, Texas, as part of an upper middle-class African-American family in the days of Jim Crow segregation. She and her two sisters were expected to excel in school and life, but after high school, her older sister Sandra veered off the straight and narrow and into a life of petty crime and sexual experimentation. Facing an eight-year prison sentence, she was dealt a new blow when a gunshot rendered her a quadriplegic. The family had to make her care their number one priority, and their individual lives suffered as a result.

Konrad spins this tale in a way that illustrates the contradictory nature of sibling relationships. Sandra’s criminal activity stole focus from Konrad when she was an insecure high school student; her subsequent paralysis only created more demands. After graduation, Konrad briefly moved away to live her own life, but returned home to care for Sandra and other ailing relatives, grueling work whose rewards were sometimes hard to discern. Yet she loves her family and served them through numerous losses, creating a patchwork of memories. A smattering of spelling errors and a few misused words don’t mar what is often thoughtful and moving storytelling.

The Blessing of Movement will resonate with caregivers or anyone who has both loved and hated a sibling. And while it’s not the story’s main focus, Konrad’s upbringing also offers a unique look at the ways class influenced some families’ experiences living through segregation.