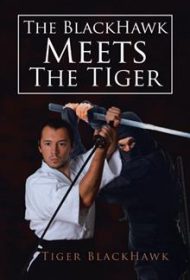 Tiger Blackhawk offers a dizzying array of narrative ingredients in The Blackhawk Meets the Tiger.

Ninjas. Dragons. Dwarves. Giants. Vampires. Pirates. They all feature in this fantasy tale that’s rooted in the exploits of the two larger-than-life title characters. The Blackhawk, a ninja/brigand whose expertise is sowing chaos, and Lord Tigerous Kunig, a benevolent warrior-king nicknamed The Tiger, operate in an imagined realm populated by a long roster of monsters and mystical creatures.

In the fictional countries of Caja and Kilt, the Blackhawk and the Tiger take part in epic clashes of empires and consummate struggles between the forces of good and evil. The author spells out their battles in the voice of a narrator named Silver, a bard relating their deeds to readers through connected tales told to a small crowd gathered around a campfire. This basic structure gives the novel an episodic feel.

Unfortunately, this framework becomes confusing, and the ambitious but ultimately jumbled story needs a healthy dose of continuity. The story features an overly crowded cast of characters and conflicts; it’s impossible to get a sense of the real thrust of the tale between dragon attacks, pirate battles and subplots that feature dwarven kingdoms battling giants. The author constantly flips between narrative voices and, unfortunately, verb tenses, muddling the story’s flow. Add to these issues a plethora of spelling errors and grammar mishaps, and it’s difficult to feel immersed in Blackhawk’s imagined world.

That world takes its cues from a host of genres, from the classic fantasy of Tolkien to the samurai action films of the ‘60s and ‘70s. Sadly, the author fails to find a through line to tie all of these elements together, delivering an often-frustrating read.