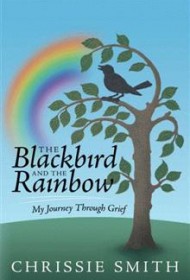 The Blackbird and the Rainbow begins as Chrissie Smith, spending a pleasant weekend with her husband, Geoff, and their youngest son, Steve, receives the news that her oldest son, Dave, has died of a heroin overdose. Dave seemed to have finally kicked his drug habit, which makes the news even more devastating.

After this dramatic beginning, Smith recounts her journey to this shattering moment. She recalls her university days, unhappy first marriage to Dave’s father, teaching career, courtship with Geoff and the struggles her family endures as Dave’s behavior spirals out of control. After Dave’s death, Chrissie develops an obsession with the comedian Russell Brand, whose own struggles with addiction she identifies with Dave’s. As her friends grow skeptical but Geoff remains loyal, Chrissie follows Brand from gig to gig, growing euphoric over her brief interactions with him. Finally, she realizes it is time to leave Brand behind and begin the journey of telling her own story, which becomes The Blackbird and the Rainbow.

Smith’s memoir is notable for its candor, lack of sentimentality and sometimes-dark humor. (Of her wedding to her first husband, she writes, “everything had been perfect . . . everyone but the bridegroom really.”) Smith never valorizes herself or idealizes Dave or other figures in her life. But the narrative is often too plodding for these qualities to shine. Smith frequently includes blow-by-blow accounts of events (such as hotel meals with friends) that are only tangential to her major theme. This style tends to bury salient moments in an overwhelming tangle of physical detail. An exception to this problem is the section involving Brand, in which Smith drops much of the descriptive padding and displays a vivid emotional urgency.

The Blackbird and the Rainbow contains some involving, raw and unguarded writing, but such passages occur too sporadically to sustain reader interest throughout the book’s substantial length.