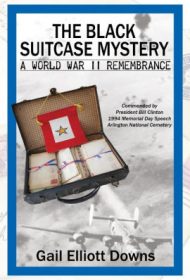 Gail Elliott Downs’s nonfiction book details the contents of the titular suitcase– some 200 letters from the 1920s to the ’40s, most written by the author’s relative—and the invaluable lessons they imparted to Downs and her students.

The battered suitcase originally belonged to Downs’ great-aunt Hazel, who filled it with letters, cards and other mementos from the life of her son, George Elliott Rich. He lived with his father’s family in New Hampshire while she remained in a Michigan tuberculosis sanitarium. The material dated from his birth till his death as a crew member on a B-24 bomber shot down in WWII. The trunk also contained letters from Wanda Rich, whom George had married a year before he was killed.

After Hazel died in 1979, the suitcase came to Downs’s mother and was later rescued by Downs, an elementary school librarian. It sat largely ignored until in 1991, when a fifth-grade teacher was looking for a classroom genealogy project and Downs remembered the suitcase.

The students – and subsequent classes – eagerly took on the project, which coincided with the war’s 50th anniversary. They reconstructed George’s life from the letters, found Wanda, explored WWII history, met veterans, including some who served with George, and earned national recognition for their efforts.

The book’s first portion chronicling George’s and the suitcase’s story is the most interesting, even though George’s missives are typical, nothing poetic or deep, and Downs’ narration lacks great emotion. In the second half detailing the students’ involvement, the mystery of the suitcase has been largely solved, and the communications with those connected to the project can seem drawn out. Summaries of the letters, instead of including them in their entirety, would have helped.

Still, The Black Suitcase Mystery is poignant – George was shot down on his 50th mission, just before he would have rotated back to the States – and inspiring. Hundreds of people of all ages benefited from the curiosity and hard work of a group of 10-year-olds, who proved that lessons can extend beyond the classroom.