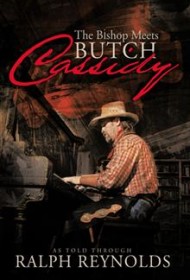 Ralph Reynolds’ The Bishop Meets Butch Cassidy has an attention-grabbing title, given the mention of the famed outlaw. And, indeed, Cassidy takes a star turn or two in this slim novel. But the real story revolves around Scottie Abner and his friendship with Clem Grace, a young cowboy — and explosives expert — looking to go straight after riding with the Wild Bunch.

Scottie’s father offers Clem a job on his ranch in the Mormon town of Wistful in the Four Corners region. Wistful also is home to Deseret, a vivacious young woman loved by Scottie, and whose increasingly obvious affection for Clem will cause Scottie to betray his newfound friend when the Wild Bunch returns to Wistful, “a place that’s hard and high and lonesome … [that] brings out the true souls of its people.”

And what souls! Too often depictions of the Church of Jesus Christ of Latter-Day Saints tend to focus on its history of polygamy and the abuses of contemporary breakaway polygamist sects, with heavy emphasis on the faith’s no-drinking, no-caffeine strictures.

But the Saints who populate Wistful are a feisty, human lot, concerned more about accumulating cattle and tillable land than amassing multiple brides. They’re accepting of the nonbelievers in their midst, such as Red Dog, an unrepentant drinker and gambler who works for Scottie’s father as a handyman. Even Wistful’s new bishop wields the Book of Mormon and a sawed-off shotgun with equal dexterity, something that comes in handy when Butch and the Wild Bunch are around.

Reynolds braids several story lines with graceful prose and believable period dialogue. A reader quickly becomes invested in his characters, rooting for Scottie to find his way to redemption. That Reynolds’ bittersweet ending satisfies is a testament to his skill as a writer.