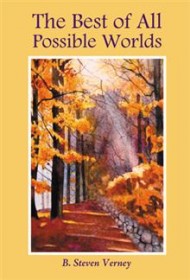 In his novel, The Best of All Possible Worlds, B. Steven Verney attempts to ground the teachings of Transcendental Meditation within an American context. The narrative thread takes the protagonist, Sam O’Connor, from his graduate studies in New England to an intensive training course with Maharishi Mahesh Yogi in Switzerland and then back again to Amherst, where Sam begins teaching philosophy.

As his life unfolds, Sam and his family experience the difficulties of trying to live with awareness in a society that places emphasis on the material. Sam, in particular, is derailed when a mentally disturbed friend attempts to murder him for proselytizing beliefs that are not strictly Christian. Sam’s path back from suffering to unity with an “infinite field of awareness” is a long one. In the author’s descriptions of Sam’s sufferings and of the characters’ interaction with society, he deftly depicts what it’s like for someone who meditates to live with one foot in the finite and another in the infinite.

Much of the book is devoted to the philosophic ruminations that take place between Sam and his students. The ruminations are designed to place Transcendental Meditation squarely within the tradition of Western philosophy. Specifically, the author points to kernels of transcendental mysticism in Plato, Christianity and the Transcendentalists. The book closes with an explication of lines from Whitman’s “Song of Myself” purported to show how Whitman was a rishi (seer) who proved “his enlightenment to us in many marvelous ways.”

The Best of All Possible Worlds falls within the genre of philosophic novels like Pirsig’s Zen and the Art of Motorcycle Maintenance and Millman’s Way of the Peaceful Warrior. Although at times pedantic, the story is easy to understand, and its plot carries the reader swiftly along. Those who enjoy philosophic discourse with their novels, or who are seeking a lucid introduction to Transcendental Meditation will enjoy this novel.