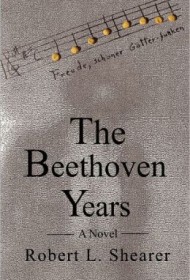 A richly detailed saga of a schizophrenic New Yorker who believes he is Beethoven, this elegant novel combines the rigor of a case study and the excitement of a psychological thriller, neatly framed by meditations on big issues such as creativity, the search for identity, the passage of time and the shrewdness of God.

A professor of philosophy and music at Florida Tech, author Robert L. Shearer has conducted deep research on street people with problems, Beethoven’s life and current psychiatric treatments. The results are anything but academic. His fiction is achingly real and profoundly moving—the work of an original, finely tuned writer.

Shearer’s indelible protagonist is a near-genius calling himself Ludi Vann (a self-styled riff on “Ludwig van Beethoven”) who communes with William Blake and a Martian, argues with God in musical code and has, in his 40s, become so obsessed with Beethoven that he imitates the deaf composer’s handwriting (a crucial plot point) and conjures up his own Immortal Beloved (another linchpin) in the person of the Quaker idealist who runs Ludi’s halfway house along with her husband.

He’s white, but delusional Ludi sometimes speaks in vivid black street English. “I got the machine,” he explains to his touching homeless friend Blind Boy Eddy. “I can show them the way back. That why I deaf: I know the abyss and how to make it echo in sound. Sound that damn mean something.” Shearer’s priceless supporting cast includes three shrinks, two amusing musicologist/detectives and, late in the book, a cigar-smoking fat man named Louis Eastwind, the key to a murder Ludi may have committed years earlier.

Minor complaints: the author repeatedly misspells the anti-psychotic drug Clozaril (it’s not “Clorazil”) and a few of his tormented-yet-funny minor characters tend toward unbelievable eloquence.