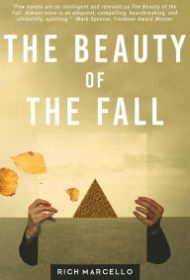 Rich Marcello’s new novel centers on a tech entrepreneur who tries to change the world as he grapples with personal demons.

Dan Underlight, an executive at the technology firm RadioRadio, has survived a divorce and the death of his ten-year-old son, Zack. Then Dan’s boss, Olivia, who has been a close friend, fires him.

Dan’s friend Willow, a free-spirited poet and advocate for domestic violence victims, buoys him after this third loss, encouraging Dan to start over and build the company of his dreams. The two become lovers. Dan recruits three former colleagues, and together they start Conversationworks, a company that aims to solve societal problems by aggregating the results of virtual conversations held worldwide.

The new company is successful, especially after Willow joins the team and spearheads an effort to combat violence against women. But with success comes unwelcome attention, particularly from Olivia, who grows jealous as RadioRadio’s star fades. Meanwhile, Dan struggles to find meaning when he betrays Willow’s trust and continues to grapple with Zack’s loss.

The Beauty of the Fall has a great deal to recommend it to readers of literary fiction: the excitement of a business venture, the poignancy of a primal loss and a host of unusual characters. Marcello doesn’t pull his punches when describing Dan’s self-destructive behavior (born of his grief and helplessness), nor does he force a happy ending.

On the other hand, the novel has a cloying side that seems at odds with Marcello’s bracingly uncompromising story. The Conversationworks core team’s penchant for group dancing; Willow’s rather trite poetry, which Dan finds awe-inspiring; Dan’s use of pipe cleaners and Dove chocolates in his sessions with his therapist —all of these seem better-suited to a more sentimental or reassuring story.

Marcello’s novel should appeal to some fans of such socially conscious authors as Barbara Kingsolver and Ruth Ozeki. A more consistent narrative tone, however, could greatly broaden its potential audience.