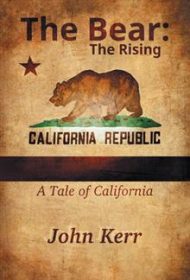 This story of 19th century Southern California is constructed from several strands woven together into a single powerful narrative.

The book opens several centuries earlier with a Spanish officer, exiled from San Diego for running afoul of the Inquisition, finding refuge with a native tribe, falling in love and raising a family.  His descendants will form one strand. Another begins in Ireland when young Sean McGuire is forced to flee to California to escape the weight of English oppression in his homeland.  The final strand is the story of Lee Sing who arrived in San Francisco from Canton, witnessed murder, racism and claim-jumping in the gold fields and fled south.

The three strands come together at the ranch McGuire struggles to establish south of the squalid frontier town of Los Angeles: one of the Indians descended from the Spaniard agrees to act as guide on a cattle drive from Texas while Lee Sing signs on as the cook.

With everyone now in place, the novel becomes an often blood-soaked account of McGuire’s climb to success and influence.  Along the way, readers are exposed to a host of well-crafted historical events, from the struggle to break away from Mexico through the coming of the railroads, class and ethnic conflicts, and frequent contests to control the future.

The trail traced by the novel may be too saturated with gore for some, and the central figure of Sean McGuire can sometimes seem a bit too charismatic and capable. Additionally, the writing is plain and rather staccato. More variation in sentence structure would have made for a smoother read. Still, the picture the novel paints of the battle to establish an identity for California and Californians is fascinating, and the characters, apart from their occasional excesses, ring true.

The book should attract those interested in California’s history during the period and, from a wider perspective, those who like reading about how people surmount obstacles to realize their dreams.