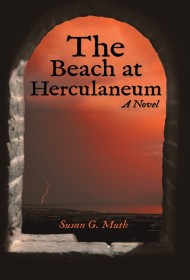 A mother’s mourning is a lonely business, but sometimes another voice can break through the seemingly unbearable grief. In her dramatic and moving debut novel, The Beach at Herculaneum, Susan G. Muth calls on voices from centuries past to inspire a healing journey.

Muth introduces Anne McCarthy on the shores of present-day Lake Michigan, where her husband and son were killed in a tragic accident. Seeking solace, Anne makes her way to a convent retreat, but she’s haunted by visions that she can’t ignore. Apparitions appear to her from the ancient city of Herculaneum. They tell the story of another family — Daphne, Marcus, and Alexander — in the days before Mount Vesuvius’s fateful eruption buried their bustling city in ash.

It’s not unexpected that Anne must travel to Italy to solve the mystery of these visitations and heal her grief, but the seamless way Muth intertwines the parallel stories of Daphne and Anne is most surprising and welcome. She alternates between the women’s perspectives, managing to maintain their distinctive voices and still craft a cohesive story. Anne’s unexpressed grief builds up to the boiling point just as Daphne’s family is threatened by the real-life equivalent: an exploding volcano.

Expert pacing keeps the story moving, and the spooky events at Herculaneum’s archaeological dig sustain the sense of mystery. Muth balances the action with romance, as Anne entertains a possible relationship with a handsome young archeologist and Daphne celebrates her husband’s triumphant return from war. In both cases, the dialogue flows naturally and accurately evokes the time and place.

The Beach at Herculaneum is a true page-turner, and readers will feel as if they are racing against time to save the lives of these courageous heroines.