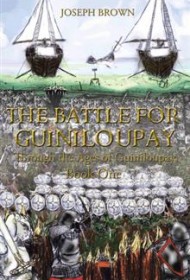 In this fantasy that seems geared to young adults, guinea pigs in the fortress city of Guiniloupay join forces with a band of penguins to defeat vicious mice and drive them from their lands.

A clan of nomadic guinea pigs organizes to find the necessities for long-term survival: abundant water, game, and farmland. Their new settlement gradually becomes a great city, Guiniloupay. Then penguins arrive with terrifying stories of warlike mice to the west, bent on conquest. The guinea pigs and penguins form an alliance to fend off the mice, but the mice triumph, occupying Guiniloupay and turning its former occupants into slaves. Rebellion gradually brews among the conquered, but even as they overcome their foe, celebrate, and prepare for the rebuilding of their empire, the remnants of the mice forces are plotting revenge.

The Battle for Guiniloupay, envisioned as a series, is action-packed, with many battle scenes. Author Joseph Brown, himself a military man, handles those passages well. The saga requires good guys and bad guys; here, they are starkly drawn, making for superficial characterizations. Additionally, it’s curious that all the animals behave like humans, hunting with bows and arrows, farming, mining for and trading with precious metals. (There are no outstanding female characters.)

Another issue is the fact that no concession is made to height or other species’ differentials among mice, penguins, and guinea pigs; they all seem to be the same size and all wield metal armaments and make war like humans. Thus, some potentially intriguing elements of interspecies conflict (and friendship) are missing that could have made the book more stimulating to intelligent young readers.

Although the story has appeal for its fast pace and action scenes, The Battle for Guiniloupay would be improved by deeper delineation of the natural differences, abilities and deficits of its large cast of characters.