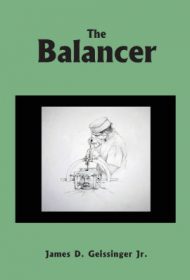 James D. Geissinger, Jr., a former brain surgeon, prefaces The Balancer by noting that sometimes solutions to current problems can be found in science fiction, a genre that predicts scientific advancement. In fact, he further notes, his book offers a potential solution to the problem of mass murder.

At the center of his present-day, science fiction novel is Dr. James David Gruenwald, a neurosurgeon who tells his morality tale in the form of a journal he’s writing while in captivity, somewhere in the outskirts of Siberia. Gruenwald explains how he became concerned about mass shootings. Before getting captured by the Russians, he set up a foundation and a laboratory, and his experiments led him to develop a surgical technique for correcting the brains of mass murderers.

“All the psychologists, psychotropic medications, sociologist and penal institutions in the world could not have accomplished what I did that afternoon in that magnificent laboratory,” the doctor writes, adding that he achieved the reverse of Dr. Frankenstein: “By creating a balance in the mind of a similar monster, I have conversely been able to extinguish that evil from within the brain’s very substance.” But, could the good doctor’s methods be used for evil ends? The novel grapples with this question, as the protagonist is kidnapped by Russian captors with presumably that intent.

The novel’s chief strength is that it delves deep into the science, exploring this surgery and its development in a believable way. Science fans will likely enjoy the long passages about the surgeon’s journey.

However, the story would reach more readers if its dialogue were improved, giving characters their own distinct voices, rather than generic ones. Its pacing, often impeded by Dr. Gruenwald’s meandering thoughts, could also be tightened. Finally, the doctor is hard to like, as he seems egotistical and patronizing to women and is often preachy.

Even with these shortfalls, conservative, male readers with a scientific bent might enjoy this science fiction tale.