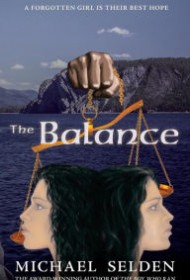 Michael Selden’s The Balance is a young adult dystopia set 200 years after a technology-driven apocalypse.

In the disaster’s aftermath, two secret societies are left to divide the loyalties of Earth’s remaining inhabitants in a delicate (and eponymous) balance. The Council is descended from the world’s religious institutions and members aim to shelter their people from the evils of technology. The Order hopes to use genetic engineering to steer human evolution in a new direction. Unwittingly caught between these forces is Phoebe, a gifted 17-year-old with mysterious heritage, who is plagued by psychic wounds and a superhuman knowledge of the minds of others.

Daniel, Phoebe’s adoptive father, has spent a lifetime hiding her powers and past from The Council. He aches for the loss of Phoebe’s mother and fears what could happen if their secrets are uncovered. Phoebe’s love for the son of a Council official, Caleb, could expose them both, and as her powers multiply, she’s haunted by mental ghosts of her absent mother.

When events extend beyond her control, Phoebe will have to learn whether Caleb is an ally or enemy and how the fate of her mother is tied to her own.

YA dystopias are increasingly common, and because of this they can sometimes grow stale. Selden doesn’t let that happen here. Readers may wish for more detail on how the novel’s world came to be (e.g. more specifics on the motives of The Order and The Council, and more historical background of the conflicts that led to the warfare that destroyed so much of the population). But because Phoebe’s experience remains compelling and believable, this is a minor quibble. We can relate to the difficulties Phoebe has taking on superhuman responsibilities — the stakes couldn’t be higher — and this makes her easy to root for.

Ultimately, The Balance does a skillful job of delving into well-trodden territory yet still producing a fun, engaging story, one particularly well-suited to a teen audience.