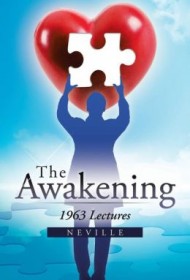 Neville Goddard may be one of the most important spiritual writers of the 20th century. He’s also one of the most unknown. Born in 1905 in Barbados, West Indies, Neville left his homeland at the age of 17 and began exploring metaphysics and New Thought philosophy. He eventually moved to New York to become a dancer and with the help of a mysterious sage named Abdullah, began writing books and teaching techniques for self-transformation.

His primary idea stressed the power of the imaginative mind and the need to live in the end result — meaning, if you want to lose 50 pounds, you imagine yourself in the present moment living as if you were 50 pounds lighter. In time, change follows and your goal is attained.

Neville’s ideas, popular for many years, were mostly forgotten in the last few decades until the likes of self-help author Wayne Dyer and historian Mitch Horowitz began to illuminate the importance of his thinking.

The Awakening is a collection of Neville’s 1963 lectures that focus on esoteric interpretations of the Bible. For Neville, the characters in the Old or New Testaments were archetypes that expressed universal ideas; for example, to understand the trials of Christ was ultimately to understand yourself. Neville explores this basic idea through the stories of Esau, Jacob, Paul, and those of sin and resurrection. His insights, such as the different stages of initiation represented in the stories of Moses, Elijah and Jesus, are fascinating and profound, if sometimes a little meandering.

The book is dense (544 pages) and like many of Neville’s books (which are in public domain and published by numerous smaller publishers around the country) it is filled with typos. But this book is essential to understanding Neville. While it might be too prodigious for the casual reader, Awakening is an important testament of an inventive thinker and provides a wonderful opportunity to expose modern readers to his influential thoughts.