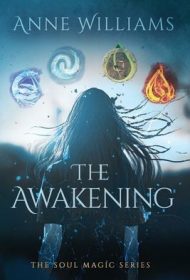 Anne Williams’ novel tells the story of a 12-year-old girl who is selected for an elite boarding school for those who are magically affiliated with the elements of water, fire, air and earth.

Choosing the affiliate of water, Emily shares a room in the water dorm with Ashley, who becomes her bestie. Emily soon learns she also has an affinity to earth. The goal for Emily and her first-year classmates—dubbed Abecedarians—is to fully awaken to their elements and true souls, which they later learn have led many past lives.

Emily becomes close to fire-affiliated classmate Brandon, but their budding romance is dashed by a childish misunderstanding, and Brandon is soon enamored with new student Myra. Meanwhile, Emily grows close to her water instructor Lir, with whom she senses a familiarity. As the story unfolds, Emily and Myra clash, Brandon becomes jealous of Lir, and Emily learns startling information about her soul life.

Readers will enjoy the intriguing plot, as well as the fully formed characters. But some may take offense at the anti-Christian themes (e.g., Emily’s father wants to force her to be baptized, which will remove her growing magical powers), as well as a cringe-worthy Holocaust comment Brandon makes during an otherwise fairly light moment.

Emily and Lir’s relationship also has troubling undertones. Lir is 19 while Emily is 12, yet they exchange a passionate first kiss. (This is disturbing, even though Emily’s soul is thousands of years old and they were lovers in a past life.) Emily’s preoccupation with the opposite sex makes her seem older than a middle schooler.

Additionally, the dialogue – as with the Holocaust exchange – is sometimes clunky; characters tell each other things that should be revealed by actions; and too often the author uses distracting synonyms for “said” (“blurted,” “whispered,” “commanded,” etc.).

Even with its shortcomings, however, the book’s plot and characters will engage most readers, who will await more of Emily’s story in a forthcoming sequel.