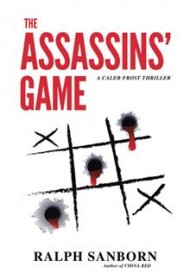 After completing his latest mission, Caleb finds a mysterious GPS device in his hotel room that leads him to the dead body of a former associate. He learns that someone is killing assassins, and that his own life is in danger. Believing these new killings are linked to the long-ago murder of his parents (also assassins), Caleb sets off to track down the perpetrator. This mission takes him to Latvia and Japan—and into the darkest corners of history.

The Assassins’ Game is blessed with a set of main characters well-suited to a multiple-book series. Each has an unusual enough backstory to sustain greater development over time. Likewise, the novel’s central conceit is intriguing.

The plot development and writing style, however, are uneven. For instance, Rebecca’s mission doesn’t quite gel with the rest of the novel. Her part in the story is not nearly as developed as Caleb’s and frequently reads like an afterthought thrown in for titillation. Sanborn’s writing is full of descriptive turns of phrase, as when describing the GPS device as a potentially “deadly nighttime chocolate on [Caleb’s] bed.” While sometimes this style is evocative, at other times it feels strained and overwrought, as when comparing the ink of a signature to “blood from a fatal wound.”

The Assassins’ Game has the bones of a good thriller, but isn’t yet polished enough to shine. With some recalibrating and editing, however, it could be a solid addition to the thriller genre.