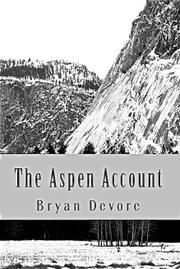 When Michael Chapman’s friend and co-worker Kurt Matthews is killed on the ski slopes, Michael’s employer, Cooley and White, a big league Denver accounting firm, thrusts him into the middle of Kurt’s work for X-Tronic, a major software corporation. What Michael doesn’t know is that his boss at Cooley and White handpicked him for the job because he seemingly lacks initiative. When Michael turns out to be someone quite different from the expected, the chase is on to bring him down before he destroys Cooley and White — and X-Tronic.

Devore’s first book and foray into the suspense/thriller genre is a competently written and timely entry into this popular market. Devore is an accountant in real life and it shows. He excels at making accounting accessible, and believe it or not, even interesting, as he explains the financials of these large corporations and how they can so easily run into financial hot water. There’s insight here for the layperson on how some of the largest corporations so spectacularly fell from grace.

On the negative side of Devore’s ledger, the reader is asked to overlook some character stereotypes – the intrepid reporter, the relentless U.S. marshall – and to forgive some logic-defying moments not uncommon in this genre. Michael falls off a cliff at one point and later is shot, but nothing stops our hero. When Denver and the mountains have back-to-back blizzards, the chase goes on, despite conditions that would normally shut down a city for a week.

On the positive side, Devore has enough plot twists to keep the reader turning the pages. To his credit, also, he involves Michael in a romance — and it is not with the intrepid reporter, as readers of the genre might expect. For anyone who’s had enough of action lawyers, make way for a new breed of hero: your friendly, local accountant. You’ll never look at the folks at H&R Block the same way again.