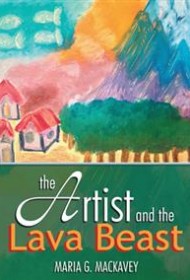 The Artist and the Lava Beast is a whimsical picture book featuring an artist interacting with his canvas. As the book opens, the artist stares at a blank white canvas and “wondered what he was going to paint today. What colors, creatures, stories would emerge as he picked up his oil sticks and applied them to the empty canvas.”

The story then demonstrates the artistic process as the artist first transforms his canvas into a forest, then, after selecting an aqua oil stick, decides to add fish. His imagination later spins a story of an active volcano threatening a brave little house in the otherwise shuttered village. And as the artist continues to work, mountains rise from the earth to calm and comfort the “lava beast.” Finally, It cools, becoming part of the mountain itself.

While a lesson in the power of imagination, this book also aims to teach children about unusual colors. In the text, adjectives describing color are written in their respective shades. Standard words such as “pink” are represented alongside “mauve” and “lemon yellow.”

Although creative, this feature poses some problems, especially when similar colors appear on different pages, making them hard to compare. In addition, the colors aren’t always well-reproduced (for example, when “aqua blue” is written on a page with an orange background, the color becomes more gray than blue). Furthermore, we learn at the end of the book that the bright illustrations are cropped portions of a larger, finished oil painting. It would be interesting, instead, to see the canvas slowly come to life, complete with constantly shifting shades and imperfections.

The advanced words and some plot points may be lost on young readers, but this book features a promising premise for teaching children new vocabulary and encouraging artistic thought. Despite its flaws, parents and children alike will find entertainment and value in this colorful, fanciful story.