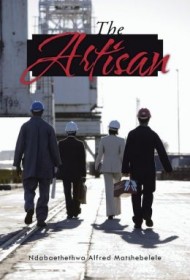 A young South African man works hard to raise his status in life, while the woman he loves schemes to elevate romance with another man in this novel set in the present day.

Protagonist Jacob is in his mid-20s when he falls for and marries Lucy, who is drawn to his ability to improve her standard of life. Jacob’s work in the mines is difficult and dangerous, but he puts in long hours to provide a good home for Lucy and a child from another relationship.

Lucy, though, secretly loves her son’s real father. She engages in an affair with him during Jacob’s many hours away from home and devises a plot to leave Jacob. When her husband eventually gets wise to her deceit, the result is disastrous.

In this story, the author succeeds in showing the perils of mine work, as well as the difficulties of black-versus-white privilege in his country and the ways in which politics can have a negative effect on one’s success in life. However, these details seem to run alongside the plot rather than being intricately interwoven in a way that enhances the action. Overall, the plot is both poorly executed and tepid, and the main characters are flat and thinly developed.

In addition, the novel is rife with flawed expressions (for example, after Jacob is offered a job as boilermaker, the author writes: “Life became a bowl of Sherries . . .”). The book is also hampered by word misuse, spelling and punctuation errors and confusing syntax. (One sentence reads in its entirety: “said [sic] Jacob loud to peter [sic] who had trouble hearing him as the noise made by people taking [sic] shower was like a choir to his ears.”)

In sum, the book is a poor showcase in its present form, offering far too little that is compelling to readers. While it contains a promising germ of an idea, the novel requires thorough revision in order to draw readers.