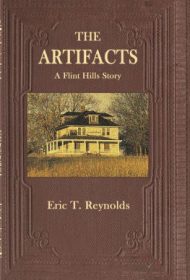 In The Artifacts: A Flint Hills Story, an abandoned farmhouse library opens doors to the past.

Blogger Kayla has purchased a Victorian home in Sycamore Falls, Kansas, with a separate, run-down farmhouse on her land. Exploring the farmhouse, she quickly discovers a way to time travel, and she and her friend Kevin suspect that two missing teenagers may have discovered the same strange phenomenon and become stuck in the past. As they explore, both are repeatedly drawn to go back in time: Kevin to the 1960s and Kayla to the late 19th century where she develops strong friendships. Why are they drawn to the past and how can their experiences benefit the lives of others in the present day?

The premise of The Artifacts is well conceived and intriguing. Different books and artifacts take Kayla and Kevin to different time periods, according to when they were written or made. The device allows Reynolds to explore different eras in the town’s history and draw interesting contrasts between clothing, shopping, music and travel, as well as changing attitudes toward women and minorities. Several mysteries preoccupy Kayla and Kevin, including the missing teens, a murder involving the previous owner of the properties, and the area’s tribal history.

Despite the rich potential for action, the novel is surprisingly free of page-turning drama. Kayla’s slow approach to searching for the missing children lacks credibility, and neither she nor Kevin are well-developed characters; as a result, although Kayla changes as the story progresses, it’s unclear why she makes the choices she does.

While such issues detract from the book’s overall effectiveness, it may provide suitable light reading for those interested in history and small-town American living.