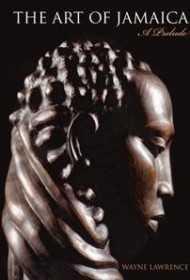 The story of Jamaica’s settlement stretches back thousands of years, with roots in the arrival of the first indigenous settlers from South America starting in the shadowy eras of prehistory. Despite the country’s rich past, the story of its artists and their creative expression feels much more condensed, a tale cut painfully short by the specters of slavery, which robbed native authors of their voice until well after abolition. That element is clear in Wayne Lawrence’s The Art of Jamaica, an illustrated, coffee-table-style volume that focuses on 18 of the country’s most accomplished and prominent modern artists.

Lawrence, a physician who also attended the Edna Manley College of the Visual and Performing Arts, details the works of Jamaican artists like Carol Chrichton, Kay Sullivan and Barrington Watson. All of the artists featured in the book are still creating fresh work, with the exception of Mallica “Kapo” Reynolds, who died in 1989.

Relying on firsthand input from the artists, Lawrence offers a tapestry view of an art scene that is vibrant and evolving. In detailed canvases that recall the eerie work of Francis Bacon, David Boxer hints at the scars of British colonialism and the slave trade that was abolished in the 1830s. Carol Chrichton opts for abstract imagery and vibrant colors to explore the country’s history:Â¬ her piece “Phillippo Baptist Church” focuses on a parish that was integral in the struggle against slavery.

But the wounds of the past aren’t the book’s sole focus. Seya Parboosingh’s bright pastels and dynamic figures recall the work of Marc Chagall. Viv Logan celebrates the Jamaican woman in her contemporary portraiture. George Rodney’s figure and color works are undeniably modern.

Overall, Lawrence tells the story of a diverse and skilled group of artists, a community still finding its distinct voice and style after being muzzled for centuries. His book, written with a keen eye for art analysis and critique, will appeal to those with an interest in history, modern art and the rich visual culture of modern Jamaica.