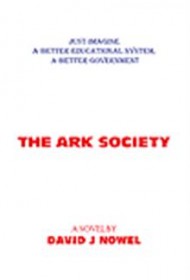 This novel is a prequel of sorts to David J. Nowel’s 2005’s Spacestation Ark, in which visionary Alex Abramawitz’s dream of creating a revolutionary new society in space becomes a thrilling reality.

The subtitle on the novel’s cover—“Just Imagine a Better Educational System, a Better Government”—is misleading; the bulk of the narrative has to do with Abramawitz’s personal relationships with various lovers (particularly a schizophrenic young woman named Keiko and an older woman whom he eventually marries named Wendy). The graphic details the author includes pertaining to his protagonist’s relationships are not only unnecessary, but they add a disturbing undertone to the story and paint the protagonist Abramawitz as an oversexed pervert. He tapes and watches love-making sessions with one of his girlfriends; he pursues and has sex with a mentally unstable woman who is about to begin lithium therapy, and, weeks later, tries to kill herself; and, when he isn’t having sex with a “real woman,” he “had his toys, rechargeable batteries, collection of magazines and large collection of X-rated movies.”

While the obsession with sex and objectification of women is unsettling, however, the novel’s fatal flaw is that there is simply is no tension whatsoever; the outcome is already known. Having a predetermined conclusion makes for a conspicuously flat and uninteresting storyline. Further hampering the narrative is a fair share of grammatical errors, some inadvertently amusing. Here, Abramawitz is having sex with Keiko: “He watched her raise her right knee, then lower it and raise her left, each movement bringing him closer to an organism.”

Toward the end, almost as an afterthought, the author begins to (superficially) explore some of the ideas and ideologies of the Ark society—electric cars, windmills in space, embracing solar energy, etc.—but it’s too little too late. Without suspense to drive the storyline and with a protagonist who is decidedly unlikable, this novel is likely to disappoint the majority of readers.