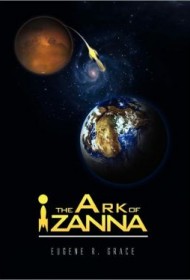 A reviewer could be compelled to give Eugene R. Grace’s science-fiction novel The Ark of Izanna the benefit of the doubt simply from the story in the author’s bio.

The book, which plays with the idea that humans originated from a fictionalized “Fourth Planet,” was conceived years ago by the author’s brother Arthur. (The bio notes that, “the technical data was Arthur’s,” while the “verbiage” was Arthur’s and Grace’s combined.) Arthur died before the book could be completed, so Eugene finished it with another contributor, Robert Crawford. Given that they fulfilled Arthur’s idea, it seems boorish to be too critical, but there’s little choice there: Izanna has a wealth of problems.

Outside of a short framing device set on present-day Earth, the story takes place on the Fourth Planet. The planet’s polar ice caps are melting, a phenomenon discovered by a genius named Izanna. Along with her scientist husband and their twin children, Izanna warns a skeptical scientific community of the planet’s impending demise. These events spur a number of responses, including the gene-spliced creation of super-intelligent little people.

However dramatic that might sound in summary, there’s precious little drama in the narrative, which reads like the pastiche of contributions it is. While some sections flow decently, others are weighed down by thinly drawn characters spouting exposition-stuffed dialogue.

This short novel also contains innumerable grammatical errors, including periods popping up in the middle of sentences. Character names are spelled with all caps (IZANNA) in one section, capitalized normally in the next, and then back again. The text that comprises the second half of Chapter 17 comprises the entirety of 18. Sadly, these errors make parts of Izanna virtually unreadable.