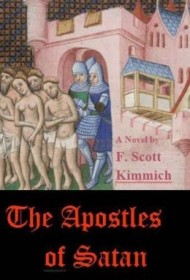 High-stakes political machinations and intrigue play out against the vivid backdrop of the Albigensian Crusades in this absorbing first novel of a trilogy.

Being up to your neck in a bruising religious war is bad enough. Now imagine an ancient scroll with revelations that have the potential to damage the very foundations of the religion you’re trying to protect.

That’s exactly the kind of trouble Arnaud-Amaury, one of the key executors of the Albigensian Crusades, is steeped in. Turns out the Abbot of the Cistercian monastery is an expert multi-tasker, trying to find and destroy the mysterious scroll on the one hand and managing the systematic purge of heresy, as presented by the Cathars in France’s Languedoc region, on the other. His battles pit him against Provençal everyman, a knight named Olivier de Mazan.

The story is absorbing, to be sure, with a few minor caveats: The large cast of characters, places, and historical details can get confusing, and while the historical facts and maps presented at book’s end are a handy resource, it might have also helped to have a glossary explaining the old English used primarily in dialogue (“Belike a few dozen, I trow, but they are forever coming and going, hither and yon”). In addition, the story is on less sure ground when it scales down to focus on de Mazan’s family. But this shouldn’t detract from the complete transport the novel otherwise provides. Despite all, the tight and impressively researched plot holds everything together with elan.

The Apostles of Satan delivers quality fiction: an engaging story, well-drawn characters, a tight narrative pace. That it also expands the reader’s horizons while doing all of the above, is just icing on the cake. It is highly recommended for history buffs, especially for fans of the Middle Ages, or for staycationers who would love a trip to the French countryside, quaint castles and all.