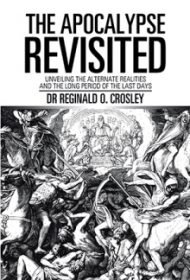 Dragons, demons, angelic armies, the end of the world. With its cryptic language and often macabre imagery, the prophet John’s Revelation has perplexed, fascinated, and frightened people for almost 2,000 years. Here, Dr. Reginald O. Crosley offers his own take on the Christian Bible’s final book, issuing a warning to readers: “In a century to come, we will see the seven-year period of God’s judgment upon the whole world. The calamities will be magnified; the final Antichrist and his triumvirate of evil will govern planet Earth.”

But don’t fret, Crosley notes. The world’s annihilation is still a long time away and such tribulations will eventually lead to the formation of a “new heaven and a new earth” that will last “for all eternity.”

Warnings like this are nothing new. But Crosley also incorporates contemporary science and cosmology theories, especially multiple universe theories, to help explain John’s mystical vision. “The book of Revelation is not a simple allegorical portrayal of a struggle between good and evil,” the author writes. Instead we “are introduced to a display of manifestations from the alternate realities created by God with different laws and principles.”

For the author, the key to understanding these realities can be found in the “eternity dimension,” which is essentially the God realm. Hence, Revelation is John’s attempt to understand the intricacies of that alternative reality.

This is not an easy read for those unfamiliar with Christian eschatology. Copious Biblical citations and references to the Rapture, allusions to Old Testament prophets, and elaborate explanations of spiritual symbols can leave casual readers feeling lost (e,g., “This event will correspond to the outpouring of the seventh bowl of wrath coming from the Father Himself during the last portion of the Great Tribulation when the Antichrist triumvirate is governing the world…”).

Crosley’s book, however, is intriguing nonetheless. Aptly written, thorough, and methodically argued, this is a quirky but thought-provoking interpretation of the most perplexing of Christianity’s sacred scriptures.