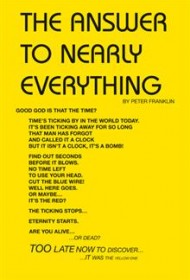 In The Answer to Nearly Everything, author Peter Franklin, a onetime engineer, sets himself a daunting task: to think through mysteries as far-reaching and mind-bending as time travel, reincarnation, corn circles and the lost continent of Atlantis.

His conclusions about these and other thought-provoking topics aren’t easy to grasp. At times, his reasoning seems to rest on one or another scientific calculation or principle that readers unfamiliar with engineering simply won’t comprehend. At other times, he lapses into the specious science that is the stock-in-trade of creationists who attempt to prove that life on earth began only a few thousand years ago.

Those who reject Biblical literalism will scoff at much in this book, such as Franklin’s attempts to pinpoint the location of the Garden of Eden and his theory of just how God managed to seal Noah and the animals into the ark. His contention that the Resurrection must have taken place on a Monday rather than Sunday is intriguing, but even readers open to fundamentalist thinking will find it often difficult to follow Franklin’s line of thought. Be warned: He jumps from one topic to another with little transition or coherence.

In places, the book is less an exploration of cosmic mysteries than it is Franklin’s take on human failings and the beneficence of a loving God. Again he suffers from an inability to state things clearly, but the essence of Franklin’s argument is that in abandoning pridefulness and the need for self-fulfillment, we gain far more than we lose, and in surrendering ourselves completely to the divine, we do find the answer to nearly everything. And that is sound theology, no matter how questionable the theology – and the science – expounded elsewhere in the book may strike readers.